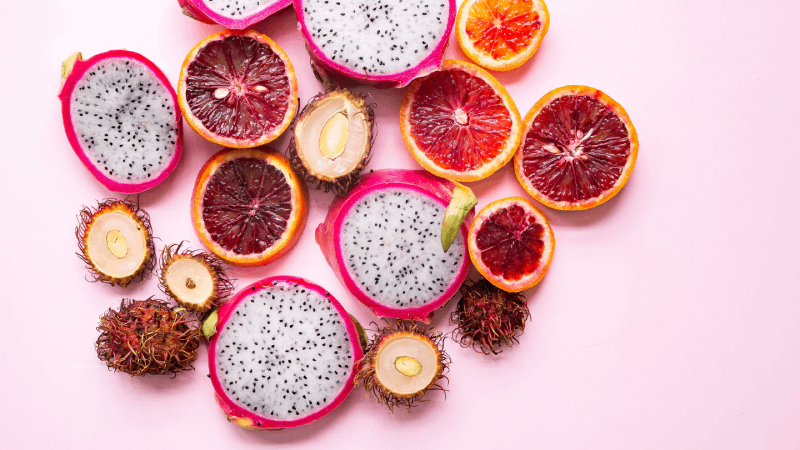 If you’re a fruit lover, then you’ve probably heard about the incredible health benefits of tropical fruits. In fact, tropical fruit can help prevent cancer, cardiovascular disease, and other medical conditions. These fruits are rich in antioxidants and should be a part of any healthy diet, especially in tropical regions. Doctors and nutritionists alike praise these fruits for their beneficial properties, and they should be a part of your daily diet, too.

A star-shaped, yellow-green fruit, the carambola is native to Southeast Asia and is often referred to as the tropical star fruit. The flesh is translucent and firm, and tastes like a combination of apple and citrus. This fruit is often used as a garnish or in fruit salads. It is also a popular addition to mixed greens salads. Though native to tropical regions, carambola trees are grown throughout the world. California and Florida are two of the best places to grow them.

Carambola is a small, star-shaped tropical fruit. The fruit has four to six outer ribs. The flesh is the same color as the fruit’s exterior, and has a few seeds in it. The starfruit is edible, and its flavor ranges from sweet to tart, depending on its shape. The star-shaped fruit can be eaten raw, and should be sliced before eating.

This tropical fruit is rich in antioxidants, which prevent the body from producing free radicals. Free radicals can damage the body’s cells and result in serious illnesses. The carambola has high levels of polyphenolics, which hunt down reactive oxygen molecules and prevent free radicals from forming. They also reduce the risk of cardiovascular disease and cancer. These properties make the fruit an excellent snack for anyone who wants to improve their health.

Carambola can be enjoyed raw or cooked. Sliced, the star-shaped fruit can be used in salads, garnishes, and even cocktails. Its slightly sour flavor makes it a delicious addition to any recipe. It can also be baked or used in stir-frying vegetables. It is also delicious in smoothies. Its versatility is endless and the sweet-tart flavor complements other fruits.

Carambola is a star-shaped fruit native to Southeast Asia and South America. It is commonly grown in Southeast Asia, but can also be found in tropical regions all around the world. It is known as a star fruit because it looks like a star when cut in half crosswise. It is rich in vitamin C and antioxidants and is high in fiber. If you’re craving a healthy snack, try the Carambola!

The papaya is a tropical fruit native to South and Central America. The fruit is ovoid in shape with greenish-yellow skin and black seeds. Its flesh is reddish and similar to melon flesh. Its flesh is sweet and has a smooth texture. The papaya fruit is eaten fresh or cooked. The fruit grows on a tree known as a papayo. The tree can reach ten meters in height and bear fruit one to two years after seeding. The plant requires full sun and responds to deep watering.

The papaya fruit has a high content of vitamin A and is widely used in skin and hair care products. Its beta-carotene content helps protect skin from sunburn. It also contains fibrin which helps in clotting. It is also used to treat intestinal worms. It is a good source of Vitamin A and is recommended for people who suffer from a Vitamin A deficiency.

The papaya plant is a tropical fruit native to the tropical regions. The fruit grows in the tropics and is commonly grown in Mexico. In 2007, 145 thousand tonnes of papayas were exported from Central America. The rest of the world’s papaya production came from Mexico, Brazil, the Netherlands, and Belize. However, despite these contributions, papaya exports were relatively small in the global market. The USA accounted for about 54% of the world’s total imports of papaya fruit in 2007.

However, papaya is severely threatened by the spread of PRSV. The disease is a serious threat to papaya production and is responsible for its yellowing leaves and green circular spots on the fruit. This disease is caused by a virus known as PLYV (Papaya Lethal Yellowing Virus) that is present only in Northeastern Brazil. The virus has a 30-nm-wide virion with a genome of single-strand RNA.

The papaya is grown in several countries including Hawaii and Mexico. It is harvested before it ripens. Its skin turns yellow and the flesh inside is orange, pink, or red. The seeds and skin of papayas are not edible. It is best consumed raw or cooked. You can also buy papaya seeds. In most countries, papaya is considered an exotic fruit. In Mexico, it is a symbol of good health.

The Lychee fruit can be found growing in the northern and southern hemispheres, and is commonly available in Chinese markets during the Chinese New Year. Despite its relatively low calorie content, the fruit is high in vitamin C and B. Lychees can be eaten raw or prepared in different desserts and sauces, and are also popular as snacks. The following are some ways to enjoy Lychee:

Lychee is native to China, where it has long been cultivated. The fruit hangs in clusters, and its rough bark turns red when ripe. The white flesh of the Lychee is juicy, crisp, and sweet, and has a pleasant floral scent. Lychee fruit is considered a low-calorie fruit, with low sugar content and high fiber. The Lychee is rich in Vitamin C, with eight-seven percent of the daily recommended allowance in 100 grams of fresh fruit.

The skin of a lychee is easy to peel off, and the white flesh is edible. When purchasing a Lychee, make sure to look for a white flesh and avoid dark spots as they indicate fermentation. You can also open the fruit in half, like you would an avocado. The seed should be removed. However, it may be present a small seed membrane. These membranes are edible.

Brewing Lychee tea is not difficult, and you can make the drink by using the fresh fruit or dried fruits. Just make sure to steep the leaves for three to five minutes, as they will have different tastes the longer you steep them. You can even re-steep it, which claims to extract the full flavour of the fruit. If you are a tea drinker, you can also brew the tea twice, using four teaspoons of leaves per cup.

A lychee is easy to peel and can be eaten raw or cooked. The fruit is white and soft, with a brown seed in the center. It is similar to a grape, but without the peel. Lychee is best eaten fresh, and its flavor is comparable to strawberry, pear, or rose. It also has a nice floral scent that can be pleasant to your senses. When choosing lychee fruit, make sure you buy it at ripeness.

The delicious African mangosteen tropical fruit grows on a tree with angular leaves that are deep blue-green. Its edible fruit is eaten raw, fermented and used to make country wines and other drinks. The fruit is also used in traditional medicine, and its powdered root is a popular aphrodisiac. Because of its edible fruit, this tree is worth growing in a warm subtropical garden. It is also easy to grow from seed, and plants can be bought in most cities in South Africa.

The most effective way to grow the African mangosteen is to plant the seeds in swamps or streams with good drainage. The tree requires moist soil and a consistent supply of water, but it can survive in poor soil as well. If you want to grow mangosteen trees in dry conditions, you can also dig irrigation ditches and water the plants daily. Mangosteen seedlings need to be protected from windy and salty soil.

Depending on the growing conditions, the African mangosteen grows from a small shrub to a large tree. It is cultivated on small-scale farms in Southeast Asia and is sold in local markets there. About half of the world’s mangosteen is grown in Thailand. The tree also grows well in southern India, north-east Australia, and the Pacific Northwest. It is also grown on a small scale in Hawaii by local growers.

Mangosteen contains a variety of nutrients that have strong antioxidant properties. The fruit is rich in xanthones, a unique plant compound that has been linked to anticancer and anti-inflammatory properties. It is available from early summer to early winter. It is an important tropical fruit, which contains essential vitamins and minerals that help to keep the body healthy. So, you should try it. It is a delicious, healthy fruit! You should try it and be amazed at its potential benefits!

The African mangosteen is often consumed fresh as a dessert. To prepare it, simply hold it with the stem end downwards. Then, cut it with a sharp knife through the rind. Afterward, lift the mangosteen up using a fork. During its ripening period, mangosteens become extremely juicy and sweet. Besides eating raw, mangosteens can also be added to smoothies and tropical fruit salads. The fruit is hard to find in the wild, but it is available in juices and canned forms.