Agricultural industry groups have strongly disagreed with the International Agency for Research on Cancer (IARC) recently raising concerns over a common pesticide, dichlorophenoxyacetic acid (2,4-D), by calling it a potential carcinogen.

“No regulatory agency in the world considers 2,4-D to be a carcinogen,” epidemiologist and toxicologist Julie Goodman said in a statement. “This ranking does not mean that 2,4-D causes or is even likely to cause cancer in people.” Goodman, who is a consultant to the 2,4-D Research Task Force, points out that among the 287 agents that share the “possible carcinogen” ranking with 2,4-D are aloe vera, pickled vegetables and coffee. Only one item is listed on the lowest tier of concern (“probably not carcinogenic”) by IARC. Meanwhile, both the European Union and the Environmental Protection Agency (EPA) have allowed use of 2,4-D. The EPA also classified the chemical as unlikely to pose a cancer risk. At present 2,4-D is used in over 90 countries with approval from their health and safety regulators.

“From the perspective of the retailers, our concern is making sure consumers don’t get confused by this announcement,” Brian Reuwee, director of communications for the Agricultural Retailers Association, said. “The product is safe and it’s an effective tool for farmers.” ARA is concerned that being called a possible carcinogen by IARC despite regulators around the world disagreeing with the assessment will lead to panic among farmers or produce consumers that would be entirely unnecessary in light of the proven record of 2,4-D’s safe use. “Regulatory agencies require these compounds to be tested for carcinogenicity, and their acute, chronic and sub-chronic effects are taken into account,” Janet Collins, senior vice president of science and regulatory affairs for CropLife America, said. “The IARC report contradicts established scientific consensus on this product and reaches inaccurate conclusions based on a flawed process.”

2,4-D use remains at least as safe as a morning cup of coffee by IARC standards, which is part of why Collins thinks the sense of alarm over 2,4-D is overblown.

Some fact about 2,4-D from Wikipedia:

From Wikipedia, the free encyclopedia

2,4-Dichlorophenoxyacetic acid (usually referred to by its abbreviation, 2,4-D) is a common systemic herbicide used in the control of broadleaf weeds. It is a synthetic auxin (plant hormone) and one of the most widely used herbicides in the world. Since 2014 genetically modified soybeans and genetically modified maize resistant to 2,4D and glyphosate have been approved in Canada and the U.S. as well as the corresponding herbicide Enlist Duo, which contains 2,4-D choline and glyphosate. 2,4-D was one of the ingredients in Agent Orange, the herbicide widely used during the Vietnam War. According to the US National Pesticide Information Center, “the controversy regarding health effects centered around the 2,4,5-T component of the herbicide and its contaminant, dioxin.”[4]

2,4-D is primarily used as a synthetic auxin analog, as an herbicide.[5] It is often used in laboratories for plant research and as a supplement in plant cell culturemedia such as MS medium. >It is sold in various formulations under a wide variety of brand names. 2,4-D can be found in commercial lawn herbicide mixtures. These products often contain other active ingredients includingmecoprop and dicamba. Over 1,500 herbicide products contain 2,4-D as an active ingredient.[6]

2,4-D is commonly used for weed control in lawns and other turf and control of weeds and brush along fences and highway and railroad rights of way.[4] In agriculture it is used as a soil application in orchards, while foliar application is used in grass hayfields, pastures, cereal grains, including corn and sorghum (occasionally).[7]:35–36

2,4-D continues to be used, where legal, for its low cost. Where municipal lawn pesticide bylaws exist, such as in Canada,[8] alternatives must be used.

A 2010 monitoring study conducted in the US and Canada found that “current exposures to 2,4-D are below applicable exposure guidance values.”[9]

Men who work with 2,4-D are at risk for abnormally shaped sperm and thusfertility problems; the risk depends on the amount and duration of exposure and other personal factors.[10]

According to the U.S. Environmental Protection Agency, “The toxicity of 2,4-D depends on its chemical forms, including salts, esters, and an acid form. 2,4-D generally has low toxicity for humans, except certain acid and salt forms can cause eye irritation. Swimming is restricted for 24 hours after application of certain 2,4-D products applied to control aquatic weeds to avoid eye irritation.”[11] As of 2005 the median lethal dose or LD50 determined in acute toxicity rat studies was 639 mg/kg.[12]

Urinary alkalinisation has been used in acute poisoning, but evidence to support its use is poor.[13]

In June 2015 the World Health Organization‘s (WHO) International Agency for Research on Cancer (IARC) confirmed its 1987 classification of 2,4-D as a possible carcinogen.[14][15]

On August 8, 2007, the EPA issued a ruling that existing data do not support a link between human cancer and 2,4-D exposure.[16]

In a prior 1987 report the IARC classified some chlorphenoxy herbicides including 2,4-D, MCPA and 2,4,5-T as a group as class 2B carcinogens – “possibly carcinogenic to humans”.[18]

It was assumed that because of improved manufacturing processes that there were no longer any dangerous dioxins in 2,4-D; however, a July 2013Four Corners investigation found elevated levels of dioxins in a generic version of 2,4-D, which is one of Australia’s most widely used herbicides. One scientist said the product tested by Four Corners, which was imported from China, had “one of the highest dioxin readings for 2,4-D in the last 10 to 20 years, and could pose potential health risks.”[19]

Owing to the longevity and extent of use, 2,4-D has been evaluated several times by regulators and review committees.[20][21]

2,4-D amine salts and esters are not persistent under most environmental conditions.[4] The degradation of 2,4-D is rapid (half life of 6.2 days) in aerobic mineral soils.[12]:54 2,4-D is broken down by microbes in soil, in processes that involve hydroxylation, cleavage of the acid side-chain,decarboxylation, and ring opening. The ethyl hexyl form of the compound is rapidly hydrolyzed in soil and water to form the 2,4-D acid.[4] 2,4-D has a low binding affinity in mineral soils and sediment, and in those conditions is considered intermediately to highly mobile, and therefore likely to leach if not degraded.[4]

A number of 2,4-D-degrading bacteria have been isolated and characterized from a variety of environmental habitats.[22][23] Metabolic pathways for the compound’s degradation have been available for many years, and genes encoding 2,4-D catabolism have been identified for several organisms. As a result of the extensive metadata on environmental behavior, physiology and genetics, 2,4-D was the first herbicide for which the bacteria actively responsible for in situ degradation was demonstrated.[24] This was accomplished using the technique of DNA-based stable isotope probing, which enables a microbial function (activity), such as degrading a chemical, to be linked with the organism’s identity without the need to culture the organism involved.[25]

Maximum residue limits were first set in the EU in 2002 and re-evaluated by the European Food Safety Authority in 2011. EFSA concluded that the codex maximum residue limits were “not expected to be of concern for European consumers”.[7]:26 The total chronic exposure represented less than 10% of the acceptable daily intake (ADI).[7]:28 Concern over 2,4-D is such that it is currently not approved for use on lawns and gardens in Denmark, Norway, Kuwait and the Canadian provinces of Québec[26] and Ontario.[27] 2,4-D use is severely restricted in the country of Belize. In 2008, Dow AgroScience, LLC sued the federal government for allowing Quebec to ban 2,4-D, but settled in 2011.[28]

In 2005, the US EPA approved the continued use of 2,4-D.[12] On July 10, 2013 the Pest Management Regulatory Agency in Canada updated the re-evaluation notice of 2,4-D stating that the 2,4-D registrants had provided it with required data and deemed them acceptable.[29] On April 18, 2012, EPA denied the petition filed November 6, 2008 by the Natural Resources Defense Council (NRDC) to revoke all tolerances and to cancel all registrations of 2,4-D. EPA stated that recent new study and EPA’s comprehensive review confirmed EPA’s previous finding that the 2,4-D tolerances are safe at anticipated exposure.[21][30][31]

In October 2014, the US EPA registered Enlist Duo, a herbicide containing the less volatile 2,4-D choline salt, glyphosate, and an anti-drift agent, for use in six states: Illinois, Indiana, Iowa, Ohio, South Dakota, and Wisconsin.[32]

2,4-D is a synthetic auxin, which is a class of plant hormones. It is absorbed through the leaves and is translocated to the meristems of the plant. Uncontrolled, unsustainable growth ensues, causing stem curl-over, leaf withering, and eventual plant death. 2,4-D is typically applied as an aminesalt, but more potent ester versions exist as well.[35] 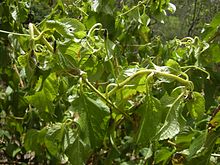 2,4-D is a member of the phenoxy family of herbicides.[4] 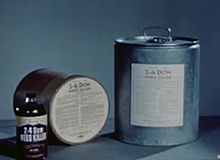 In 2010 Dow published that it had created genetically modified soybeans made resistant to 2,4-D by insertion of a bacterial aryloxyalkanoate dioxygenase gene, aad1.[37][38][39]:1 Dow intended it to be used as an alternative or complement to Roundup Ready crops due to the increasing prevalence of glyphosate resistant weeds.[40]

2,4-D was first published by Robert Pokorny in 1941, who was working in the US; the related compound, MCPA, was discovered at about the same time by scientists in UK.[43]:Sec 7.1 [44] Both compounds were developed afterwards as part of a clandestine wartime effort to create chemical warfare agents for use in World War II; 2,4-D was not used this way in WWII.[43]:Sec 7.1

2,4-D was brought to market as an herbicide called “Weedone” starting in 1945 by the American Chemical Paint Company. It revolutionized weed control, as it was the first compound that, at low doses, could selectively control dicots (broadleaf plants), but not most monocots – narrow leaf crops like wheat, maize (corn), rice, and similar cereal grass crops.[43] At a time when labor was scarce and there was a huge need for increased food production, it literally “replaced the hoe”.[43]:Sec 7.1

2,4-D was one of the ingredients in Agent Orange, the herbicide widely used during the Vietnam war. According to the US National Pesticide Information Center, “the controversy regarding health effects centered around the 2,4,5-T component of the herbicide and its contaminant,dioxin.”[4]